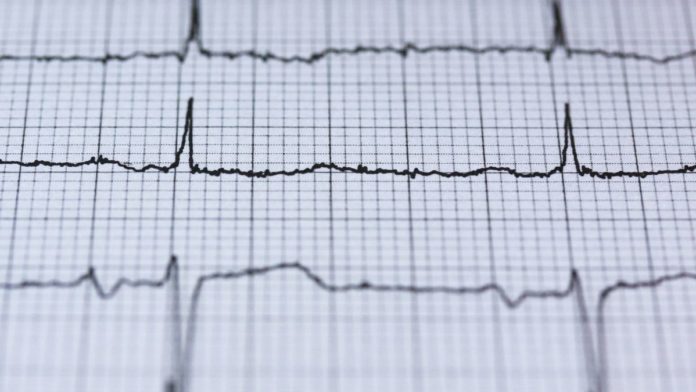 Myocardial Infarction on ECG can tell you just that. Learn what to look for in the ECG. ST-segment elevation, T-wave inversion, Left ventricular apical mass, and occlusion of the left main coronary artery are all indicators of a possible underlying condition. There are some key things you should never ignore, however.

The appearance of ST-segment elevation in more than one region is characteristic of acute thrombotic coronary events. These events can result from vascular endothelial dysfunction or coronary atherosclerosis. The resulting changes to the vascular endothelium cause a cascade of platelet adhesion, activation, and thrombosis.

An ischemic heart can be diagnosed from the appearance of an ST-segment elevation on an electrocardiogram. The changes on the ECG reflects a block in one of the coronary arteries. In this case, a physician can determine the exact location of the infarct by using the coronary angiography results. This procedure is also known as transthoracic echocardiography.

In patients with a history of myocardial infarction, the T waves may be tall and peaked. Early repolarization can be difficult to differentiate from other pathological conditions because the T waves are concordant. Acute pericarditis, for example, causes a pronounced depression in the PR and specular elevation in the aver. Moreover, ST-segment elevation is more susceptible to dynamic changes.

However, the presence of new ST elevation in more than one lead is important for confirming the diagnosis of acute ischemia or infarction. The ischemic region may be identified by identifying the position of the ST-segment shifts on the leads. In addition to assessing the size of the infarcted area, the ischemic region may be located on the ST-segment elevation of one of the leads.

The current clinical definition of a STEMI is based on abnormalities in the heart’s ST-segment. It requires the presence of abnormal cardiac biomarkers and a significant elevation of the ST-segment in at least two contiguous ECG leads. This helps the clinician to determine whether the patient is eligible for acute reperfusion therapy.

T wave inversions in the electrocardiogram (ECG) can be associated with coronary heart disease, and abnormal T waves may be indicative of ischemic cardiomyopathy. T-wave inversions are often abnormal and can differ in lead group. A comprehensive family history and appropriate non-invasive, semi-invasive, and invasive tests are recommended for patients with ischemia.

Several factors can affect the occurrence of T waves. First, people with a pacemaker often have a T-wave memory. These patients’ T-waves continue to be inverted even when they are not paced. Inverted T waves can also be a sign of a pending MI. Further, T waves are often present in more than one lead group, which is a sign of a myocardial infarction.

During the acute phase of ACS, an ECG with an isolated T-wave inversion is not alarming. In patients who have recently suffered from a pronounced episode of angina pectoris, a T-wave inversion in the leads I and Val is more likely to indicate a myocardial infarction than in those who do not have symptoms during the presentation.

In a prospective large-scale study, researchers investigated whether T-wave inversion was associated with the presence of the culprit vessel in patients with acute anterior STEMI. The study also revealed a positive correlation between T wave inversion and spontaneous reperfusion. This study supports the findings of previous studies and offers valuable information for clinicians and patients. While T-wave inversion may be an important tool in assessing the severity of an MI, it should not be confused with T-wave inversion in patients with unstable angina.

The early T wave inversion has been associated with spontaneous subendocardial reperfusion. In some studies, this finding was associated with improved left ventricular function and a higher rate of IRA patency. However, the associations between T wave inversion and angiographic findings have not been fully assessed. In the case of single ECGs with a 1-2 mm ST elevation, T-wave inversion cannot be used to determine whether a patient has spontaneous subendocardial reperfusion.

The diagnosis of a left ventricular apical mass and myocardial infarction on an electrocardiogram is made by observing the patient’s angiographic findings and performing a diagnostic test such as a CT scan. The patient’s CT scan reveals an anterior and apical mass surrounded by infarcted myocardial tissue. During the patient’s stay in the hospital, he was transferred to the catheterization laboratory for primary percutaneous coronary intervention. The results of coronary angiography revealed a total occlusion of the diagonal artery, and ST elevations persisted during the patient’s hospitalization. The patient’s bedside transthoracic echocardiography revealed a left ventricular apical mass,

The 12-lead electrocardiogram (ELG) findings of 77 patients with acute chest pain were summarized in Table 4. All patients exhibited characteristic apical ballooning and ejection fractions ranging from 10% to 62%. In the subacute period, the mean ejection fraction increased significantly to 64 + 10%. No patient showed any residual pressure gradient. Of the 48 patients, acetylcholine-provocative test resulted in coronary spasm in 10 of them.

Patients with new nonspecific cardiac symptoms should be evaluated carefully for apical masses. Echocardiography and cardiac MR are helpful in the diagnosis. Perfusion and post-gadolinium sequences help determine vascularity. However, coronary angiography is not a definitive diagnostic test. Although it is useful in the diagnosis of myocardial infarction, it is not a reliable way of determining whether apical lesions are the cause of cardiac events.

An electrocardiogram performed on a woman with symptoms of chest pain at rest showed a large LV apical mass. LV apical ballooning was found. Moreover, the patient’s electrocardiogram showed a significant increase in the T-wave amplitude and a negative T-wave. Nuclear cardiography and intracardiac pressure recordings showed the presence of perfusion-metabolic mismatches at the LV apex.

A 72-year-old lady with type 2 diabetes presented with central chest pain and shortness of breath. Electrocardiogram revealed normal sinus rhythm and T-wave inversion in the aVL. Troponin I level was 3.68 ng/ml, which is above the normal limit of 1.5. She was able to resume full exercise capacity. She was subsequently diagnosed with a papillary fibroelastoma.

Left main coronary artery occlusion is a potentially deadly condition that causes cardiogenic shock. It usually occurs spontaneously but can lead to cardiac arrest if left untreated. The left main artery is a large artery that supplies a substantial amount of myocardium. An occlusion of the left main can also result in a bundle branch block, which is a common feature of this condition.

An ECG may suggest the site of occlusion, which can be helpful in determining the location of the ischaemic region. However, ECG patterns may be misleading because of the variability of coronary anatomy. The size of the vascular bed supplied by the occluding artery can differ greatly from that of a coronary artery occlusion.

At the time of urgent coronary angiography, the LMCA was completely occluded. Despite the high probability of a STEMI, it is essential to make an accurate diagnosis as soon as possible. A positive ecg is not a guarantee of a heart attack, but an appropriate diagnosis can help patients avoid the complications that come with this condition.

In addition to cardiac catheterization, an ECG with a QRS complex may indicate a symptomatic patient’s ischemia. However, an ECG showing a QRS complex does not necessarily indicate a vascular occlusion. An ECG of an elderly man with a GI bleed and coronary artery disease shows a severe QRS complex and subendocardial ischaemia. This is most likely a result of cellular hypoxia, asymptomatic anaemia, and poor coronary blood flow.

The LMCA branches into the LAD and the left circumflex artery. The LMCA provides blood to a large portion of the left ventricle, making it a critical component of the heart. Hence, occlusion in the LMCA will result in an electrical abnormality on the ECG. This can result in ischemia within the myocardium.

STEMIs are more severe than other heart attacks. Acute coronary syndrome has a high mortality rate. Up to 10% of STEMI patients die within 30 days of the onset of the condition. STEMIs are one of three types of heart attack that fall under the category of acute coronary syndrome. The heart muscle receives blood from the three coronary arteries. When one or more of these coronary arteries is blocked, blood flow to the heart muscle is limited. This can lead to unstable angina.